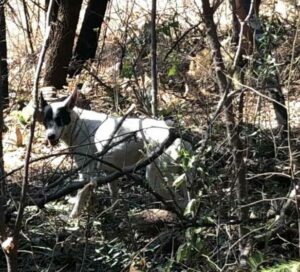 In August 2020 our team received a call from a member of the public who claimed that he could hear a dog in distress in a nearby veldt. We immediately suspected that the dog may have been caught in a snare as numerous snares have been found in the area during that time. Our team set out in search of the dog. The area was vast and overgrown, making it very difficult to navigate your way around the area. The team covered a wide area but didn’t hear a sound, the dog had gone silent and our team were not sure they were even in the right area. And then, he barked! The team changed direction and followed the barks until they reached Griffin, as we later named him. Sure enough, he had been caught in a snare which was extremely tight around his stomach. Despite the pain he must have been in, he wagged his tail when our team approached and they were able to free him from the snare.

They then carried him all the way back to the vehicles, making their way through the overgrown bushes once more. How he got there is a mystery but we are just so grateful that we were able to find him and bring him to safety. During his time at Dogtown he has blossomed into a wonderful boy who quickly stole the hearts of his caregivers with his happy-go-lucky attitude and playful nature. Griffin has really put himself out there for the world to fall in love with him. Many families have come and gone but for some reason he has always been overlooked, despite him always being on his very best behaviour.  He met his BFF at Dogtown, a sweet young girl named Crawford who carries her own scars from her life before Dogtown. They spend hours playing with each other, much to the entertainment of our caregivers and volunteers. 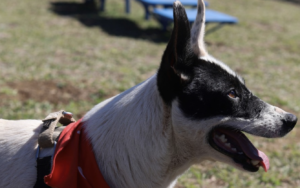 Today, a year and a half later Griffin still gets excited when families visit in the hopes that maybe this time, he will be the chosen one who gets to sail off into the sunset.