We received a call that a family had found a dog in the street with a sore on its mouth. To be honest we were so full we asked them to send us a pic and to see what miracle we could pull out of our sleeve.

When we received the pic we were shocked. It wasn’t a sore on her mouth. It looked like half her mouth was missing and she was skin and bones. Of course, the call came in at the end of the day so instead of us heading home, we loaded up into the car and headed out to get this poor baby the help she so desperately needed.

When we arrived, we could not believe our eyes. I don’t think I’ve ever seen anything so heartbreakingly horrific and yet we still got a little tail wag from her.

We rushed off to the closest vet, who advised us to put the poor girl to sleep. I just couldn’t, I felt we needed to give her a chance to know what love is. She can’t cross the rainbow bridge thinking this is what life is. So we loaded her into the car and headed straight to Fourways vet. They know we believe in miracles and always help us to make them a reality.

As she was being examined I sat in the car for the first time absorbing what had happened in the past 2 hours. My heart sank, just how are we going to cope with another year of this abuse and neglect. I snapped myself out of my pity party as I saw the vet coming towards me. Everything in my body was on edge hoping the vet was going to tell me there was something they could do.

Her face looked concerned and I began to feel panic creeping in. The vet explained not only was half her mouth missing but there were maggots under her skin. They were going to have to sedate her to try and clean the area and the sedation was a risk as she was so skinny and weak.

I knew it had to be done so I gave the vets the go-ahead. Grateful that they at least saw a glimpse of hope to try.

It was 21h00 by the time I got home. I’d felt a sense of relief that I hadn’t had a call yet so our girl must be ok for now.

No sooner had I got in the door when the phone rang and it was the vet. I could hear in her voice the news wasn’t going to be good. But she quickly explained they had managed to clean out the area and clean out the maggots. But they had discovered another issue. They had done a sonar and discovered she had dead puppies in her womb and 2 with a very slight heartbeat. Obviously, a major cesarian operation now was going to be a big risk and maybe the puppies would survive or the mamma or both or neither.

Have you ever heard of decision fatigue I was there? I felt there was no easy answer here but the dead puppies in her were causing the infection so they had to be removed. I just had to hope our girl would pull through and that her other 2 babies would somehow be strong enough.

Sadly the puppies didn’t make it but our girl survived the operation. The next 24 hours were critical. Needless to say, I didn’t sleep a wink.

The following morning as I patiently waited for the update I knew our girl had been strong through the night as I had no calls. We were over the worst.
Each day forward was just joyful news one after the other, she was doing great, her wounds were healing and she was slowly picking up weight. 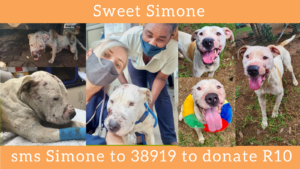 We got our miracle. Of course in true Tracy style, I focused on saving our girl and knew to worry about the vet bill later.
Her care was extensive but just to see her happy face and wiggly bum now, let me know we made the right decision.

We can never do these rescues without the support of you our townies. We are so grateful that the vets know when Dogtown brings in a dog, we’re going to try our best to save them no matter what.

As our girl enjoys her snuggles and walks at Dogtown we are so happy to see her experience this love, probably for the first time in her life.

We recently went for a check-up at Fourways and it was like a celebrity was in the building. Everyone who saw her came across to give her a kiss and some love. It’s fair to say the incredible team at Fourways love our girl as much as we do.

Now it’s time for us to give her the happy ending she deserves in a loving home.